From Duomo to the Branca Tower 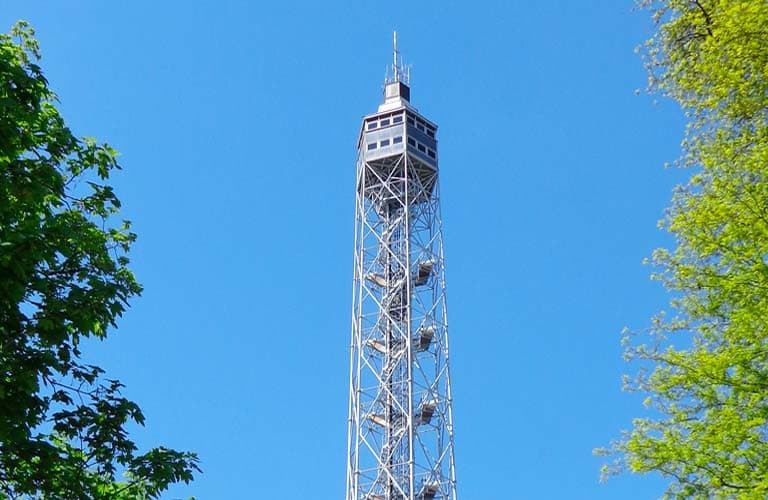 The Duomo, the one-of-a-kind only Cathedral, the largest in Italy after St. Peter's, was the tallest building in Milan from 1774 and until 1960, measuring 109 metres, with its main spire and the famous Madonnina towering above the city.

In 1923 the term grattacielo, or skyscraper was used for the first time in Italy, right in Milan. As an exception to the city development plan of the time, the 'Different Twins' were built: two splendid Art Deco buildings that can still be admired in Piazza Piemonte. Thus began the first architectural revolution, with an urbanistic novelty brought to Milan from the United States.

1933 is the year in which the architect Giò Ponti, on the occasion of the V Triennale, built the Branca Tower. A futuristic construction, a work of art made entirely of steel, within the Sempione Park.

From the Velasca Tower to the Pirelli Skyscraper 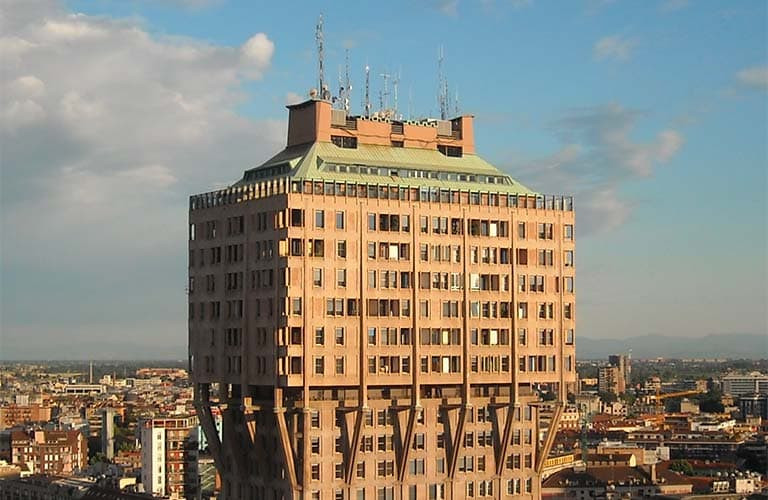 Torre Velasca has been part of the city skyline since 1957. A masterpiece of innovation that has become an architectural symbol and one of the first examples of post-rationalist architecture, it is today protected by the Superintendence of Cultural Heritage.

The Breda Tower dates back to 1955. With its 31 floors, it is the first true skyscraper in Milan and the tallest in Italy at that time: and then the Galfa Tower in 1959, another skyscraper, now the subject of major redevelopment.

We finally get to 1960 with the Pirelli skyscraper, then the tallest in Europe. Always called Pirellone (big Pirelli) for its grandeur. Designed by Gio Ponti, the steel and concrete giant dominated the city until the 2000s. It was the first tower prototype of the modern era, so much so that it inspired New York's PanAm Building (now MetLife Building). Now headquarters of the Regional Council of Lombardy and 127 metres tall, the Pirelli Skyscraper has remained at the top of the rankings as the tallest skyscraper in Milan and throughout Italy for 50 years. 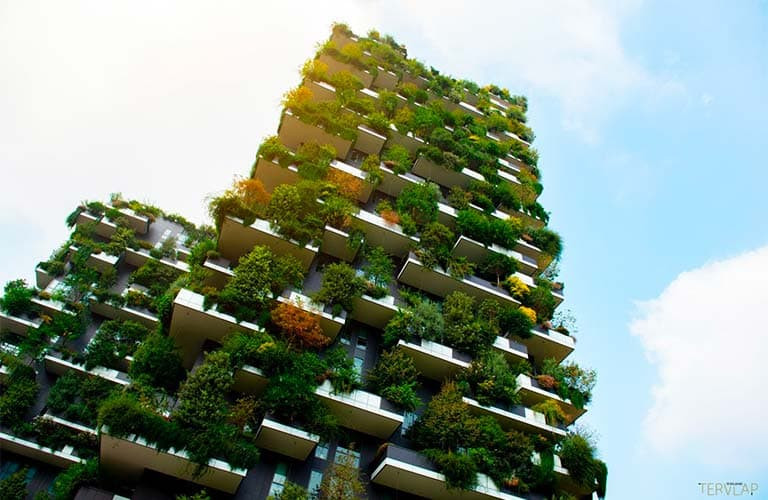 2010 was the turning point. Palazzo Lombardia was built, a 161-metre tower, in reinforced concrete, steel and glass, surrounded by lower, curvilinear buildings, with a covered and transparent oval square in the middle. The largest of its kind in Europe. In 2012, Chicago’s renownwd Council of Tall Buildings and Urban Habitat (CTBUH) awarded it as the best skyscraper in Europe for design, sustainability and innovation.

In 2014 the skyline began to become spectacular with the Unicredit Tower. 231 metres, designed by Argentine architect Cesar Pelli, it has become the most characteristic feature of the new Milanese skyline, thanks to its iconic curved spire. For the city’s urban planning, eco-sustainability becomes essential, and new innovative projects reduce polluting emissions as much as possible. What has since become one of the most famous skyscrapers in the world and the new symbol of Milan was then inaugurated, Bosco Verticale (Vertical Wood), a unique architectural complex. Two towers lined with a 'forest' of 800 trees. Plants, produce humidity and oxygen, absorb CO2 and reduce urban pollution. A visionary example of contemporary architecture, it has won many awards, including the most important in 2015, when it was declared the 'most beautiful and innovative skyscraper in the world' by Chicago’s (CTBUH). In 2019 it became one of the fifty most iconic skyscrapers in the world for innovation and environmental sustainability. Together with the Duomo, it is the building most photographed by both Milanese and tourists. The Unicredit Tower and Bosco Verticale are located in the Porta Nuova area, the heart of one of the most important European urban architectural redevelopment projects, in an eco-sustainable key. At the centre of the district are Piazza Gae Aulenti and the Library of Trees.

With the CityLife District, Milan continues to develop vertically, thus becoming one of the most avant-garde cities in Europe, as it creates new urban planning of great visual impact. The area of the former Trade Fair is now transformed into something architecturally spectacular: a large park with a triad of skyscrapers at its centre. The three towers, planned as headquarters of large companies, have each a particular characteristic that identifies them. The Isozaki Tower bears the signature of Arata Isozaki: It stands 209 metres and 50 floors tall. The Hadid Tower, designed by Zaha Hadid, measures 177 meters by 44 floors, with a sinuous line that gradually diminishes as height increases. Finally, the 175-metres Libeskind Tower, designed by the American architect Daniel Libeskind, marked out by its original, forward-tilted shape, with a dome at the top, inspired by the Italian Renaissance. Around them is the largest Shopping District in Italy, with stores and restaurants. City Life is a cutting-edge area, characterized by high standards of sustainability. 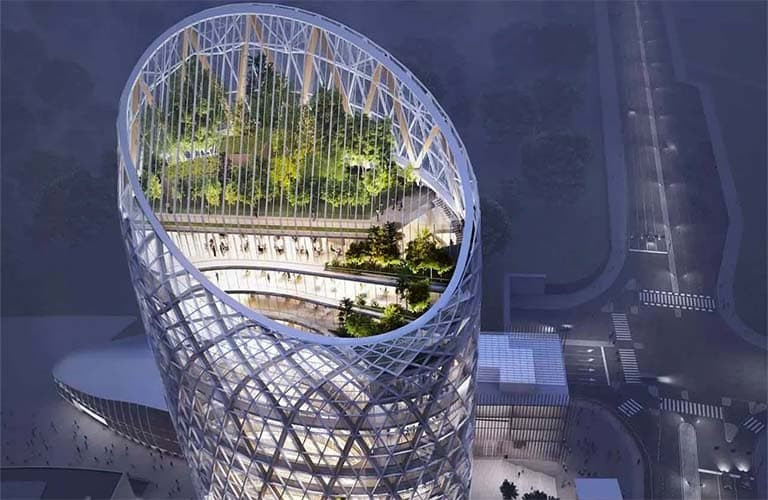 A brief mention of the new skyscrapers that will soon give the Milan skyline an even more glamorous look.

The Gate will be Citylife's fourth building. A new gateway to the neighbourhood: two iconic buildings, connected by an arched portico, covered by photovoltaic panels, which will frame the existing towers.

Porta Nuova’s new skyscrapers, almost ready for inauguration, will be Gioia22, called the 'glass shard' for its particular shape that enlarges as it rises upwards. It is a 120-metre tall tower with large energy-producing photovoltaic panels on its surface. It will be the first zero-emission skyscraper.

The Nido Verticale, or Unipol Tower, designed by Pelli Clarke Pelli Architect will be another innovative skyscraper, where materials such as wood, metal and glass will reign. Sustainability will be ensured by energy efficiency: the skeleton of the building is made up of a double layer, with a cavity in the middle that insulates both from winter cold and summer heat. Thanks to solar panels installed in strategic points and rainwater collection systems, integrated into beautiful design elements, the building's consumption of resources is reduced to a minimum.

Finally, the Faro A2A Tower: the first skyscraper in southern Milan, 145 metres tall, for 28 floors. It will become the new Milanese headquarters of A2A, the largest Italian multi-utility. Again, the project’s main emphasis is on eco-sustainability, through the use of innovative energy efficiency systems and hanging gardens located in the middle, at a height of about 60 metres.

not to be missed